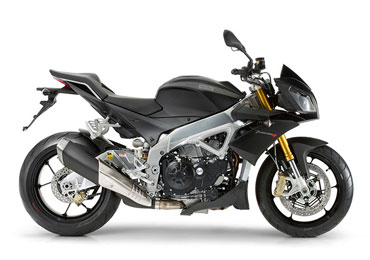 The most powerful, fast and sporty naked of all, originating from the mythical RSV4, winner of four titles in the SBK superbike world championship, is now even more incisive, sophisticated and safe and performance is greater still (170 hp), the exceptional APRC electronic system package has been further improved. Greater active safety and decelerating power, thanks to the new highly advanced braking system with ABS adjustable when used and can be excluded.

The new V4 R ABS Tuono is even more comfortable and liveable, to be the best naked also on the road.

Tuono V4 R ABS is the heir of an absolute sporty naked tradition, born from an innovative idea in 2002 that found its initial great expression in the lethal Tuono 1000 R, the first true high performance naked, closely derived from RSV mille, the super two cylinder bike among the most loved and wanted by sporty motorcyclists of the new millennium. And this is what Aprilia Tuono has always been: a superbike with high handlebar, unbeatable on the track and such fun on the road. The Tuono project has followed this same path also in 2011, the year of the radical change. In fact, in 2009 Aprilia revolutionises the superbike segment, introducing the innovative and unique RSV4 which from then had always been the benchmark of sports bikes, capable of winning four titles in the selective SBK world championship. In 2011, in line with tradition, Tuono V4 R arrives, the direct off shoot of the unbeatable RSV4: it is the most powerful, technological and sophisticated naked that has ever been made, the most thrilling, bad and incisive ever seen before, dedicated to the most integralist lovers looking for a bike that simply embodies "excellence" in all its forms. The only one in the segment that can fight and win against the most awarded faired rivals on the track with all the comfort and fun that a high handlebar allows, thanks its excellent chassis, the power of the more than 167 HP V4 engine and the unequalled aPRC electronic control package.
The know-how acquired in years of winning competitions at maximum levels has meant that Aprilia can go even further: the new Tuono V4 R ABS has an even greater performance, is more fun, incisive and safe. Available in just the one version with the best of applicable electronics as a standard feature and in two different colours (black or white), the new Tuono V4 R ABS lifts the sports measuring rod up a notch while still being even more comfortable for riding on the road.